February 01, 2012
The Labile Carbon is also known as the 'Rapid Cycling Carbon' and its composed of all the Soil Organic Matter that is dead and actively decomposing.  It's benefit to the soil is that it provides a source for minerals that are being recycled as potential plant nutrients, so in a sense it's Nature's fertilizer.

Active Carbon also known as Reactive Carbon is more complex than the Labile Carbon in that its composed of all the dead and actively decomposing organic matter plus all the living soil microbial community that will eventually die and begin decomposing.   For example, the hyphae of mycorrhizae only live about 5 to 7 days before they die and start to decompose, while the fungus organism itself may live far longer.

Recalcitrant Carbons are the Humic substances made up of complex organic chemistry, some of which is inert and some of which is very reactive and are powerful biologics, such as the Humic Acids.  Recalcitrant Humic substances are known in laymen terms as Humus. These organic compounds are rich in carbon and made up of strong chemical bonds that resist breaking, therefore they persist in a soil for a long time.  Clay particles and Humic Acids combine and make what is called a Clay-humus domain, which contributes to holding the soils structure together in macroaggregates.  The Clay-humus domain also helps to hold the nutrients in a Cation Exchange Capacity format that keeps them available to plants at all time.  Also helping to hold the macroaggregates together are the living roots and living hyphae of the plants and mycorrhizae along with the glycoproteins called Glomalin, a glue like substance leftover from the decay of the mycorrhizal hyphae.  The significance of addressing the importance of living roots, hyphae and glomalin in the same breath as the Recalcitrant Carbons and Humic Acids is the issue of how tillage, plowing and rototilling damage the structure of soil.  That activity kills the Active Carbon components of roots and hyphae, interrupting the production of glomalin, which combined causes a loss of macroaggregates, breaking everything down into microaggregates, which is not good!

The Humic Acid molecule:  Is what we need more of in our soils.  Its a powerful biologic chemical of nature, a result of a chemical reaction in soil.  They are found in greatest concentration in rich black top soils, where eons of time and perfect conditions of moisture and vegetation along with a healthy Soil Food Web have allowed them to be manufactured and concentrated.   In the Journal of Chemical Education, 2001 article on Humic Acids, its said that "Humic Acids are essential for a healthy and productive soil", a significant statement coming from a journal of science.  The image we show is a result of a collaborative effort between Soil Secrets and Femto Chemists retained for research by Soil Secrets.  The image shows many six sided Phenyl rings of organic chemistry containing carbon as the backbone. The carbon will appear as green balls in each corner of the Phenyl rings.  Before we did this work, the only model of a Humic Acid molecule was by Stevenson (1982),  only theoretical, using the conventional stick and ball model.   The Soil Secrets Humic Acid molecule was produced using femtojoule methods, which shows the subatomic structure of the molecule.  Our femtojoule method is 15 orders of magnitude higher resolution than any other  method of describing and defining the molecule of Humic Acid. This enables us to see and measure the strength of Supramolecular (non-bonded) interactions where others can only infer such interactions from rules of thumb. In other words, while others are guessing how and why a Humic Acid works, we have details and the best understanding to date of the molecular description, characterization and functionality of the Humic Acids found in our products and in soil.   For more details on how Humic Acids benefit a soil, I suggest reading the ACRES USA article 'The Science of Humus' December 2009. 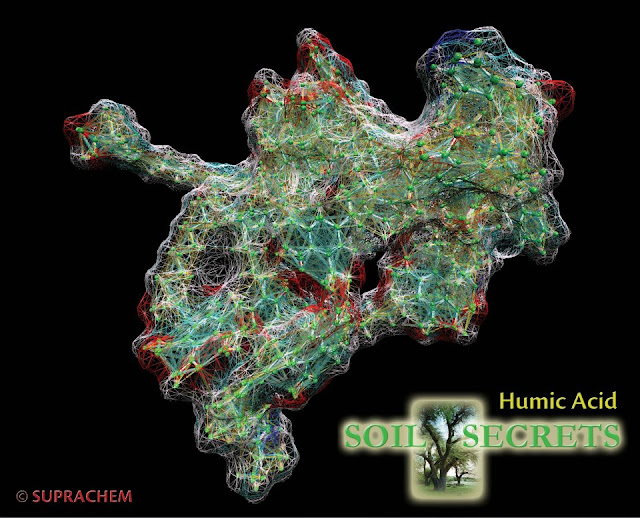 Robert LaRue said…
Dear Michael, You are giving and have given me the finest education in the soil science field and I can't thank you enough. Solid science backed up by unbiased research - I love it! Do you have any numbers or estimates on the percentage of humic substances produced by mycorrhizae and their glomaylin production? I have gotten a question about this on the Gardenweb forums. Also, the CEC of compost decreases as it is eaten by the Soil Food Web, Yes? Thanks.
February 12, 2012 at 11:25 PM

Anonymous said…
An impressive share! I've just forwarded this onto a colleague who has been doing a ittle homework on this.
And he actually bought me breakfast due to the fact that I stumbled upon it for him...
lol. So let me reword this.... Thanks foor the meal!!
But yeah, thanks for spending some time to talk about this matter
here on your site.

Have a look at mmy site soindcloud promotion (annesydyeri.wordpress.com)
September 5, 2015 at 8:47 PM

Anonymous said…
Hello mates, its enormous article on the topic of teachingand entirely defined,
keep it up all the time.

Anonymous said…
However, some take issue with its Multi-Media Interface system, which controls all climate and entertainment functions Artie Wactor
many of such trees are similar in appearance and size fot it with the bonsai tree which we sometimes equal possessing mystical
powers.
September 10, 2015 at 1:46 PM

Anonymous said…
Very nice post. I simply stumbled upon your weblog and wanted to say
that I've really loved browsing your weblog posts.
After all I will bee subscribing for your rss feed and I
hope you write once more very soon!

Anonymous said…
I am actually grateful to the holder of this site who has shared this fantastic paragraph at here.

Anonymous said…
This is a topic which is near to my heart... Cheers!
Exactly where are youir contact detaios though?

Anonymous said…
Thank you for sharing your info. I really appreciate your efforts and I will be waiting for
your further write ups thanks once again.