Here's another Proof of Concept of how Humic Acids that are bio-identical supramolecular can actually improve the soils ability to manage water to the crops advantage.   This works equally well in urban landscaping as it’s the supramolecular chemistry of these carbon rich high thermal energy molecules that actually make a soils ecology functional and habitable. These molecules have many Mechanisms of Action, including functioning as chemical shuttles and participating as Oxygen electron donor and acceptor systems helping with microbial respiration in the soil.

On the left in the photo below is the part of the field treated with 450 pounds of TerraPro per acre. 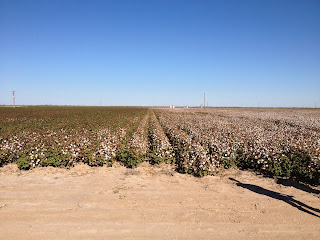 Treatment was done after the cotton germinated and was a few inches high.  The granular TerraPro was surface broadcast and not incorporated into the soil, as the site has buried drip irrigation.  The right hand side of the field was not treated with TerraPro, but both sides
were inoculated with EndoMaxima mycorrhizal product. 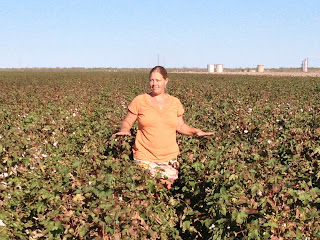 as compared to the non-treated. 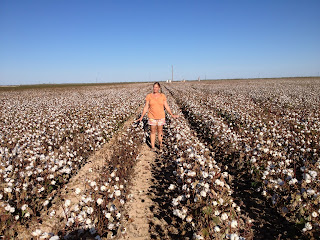 January 04, 2012
I'm very excited to share with you this very good news, that once again demonstrates that Soil Secrets is indeed 'cutting edge' in our industry.   First I'd like to cover the recent completion of testing conducted at Sandia National Laboratories on the Humic acid that we are formulating into our products.     The tests were extremely revealing and educational for us, in terms of teaching us about our own product and providing us with information concerning the Humic acid fraction that's   contained within the whole Humic substance of our products.   This is information on the 'Characterization of Humic Substances', with data and evidence that no other commercial supplier of Humic acids can provide.   Keep in mind that this is research that has never been done before and is exclusive to our company.    I'm weeding through both the SANDIA REPORT and the LOS ALAMOS REPORT now, which contains several hundred pages of data, so that I can reveal to you and to
5 comments
Read more