I've spoken many times on this subject at conferences and it was the main theme of my talk when I represented North America at the World's 1st Humus Experts Meeting in Vienna Austria back in 2013.   Most of the Nitrogen used by the vast tropical rain forests, or the fastest growing biomass place on Earth, the Coastal Redwood Forests of California, comes from the production of protein by the Free-Living Nitrogen Fixing bacteria in soil and the massive biomass structure of the mycorrhizal fungi.    The proteins as it breaks down in the soil into amino acids are the building blocks of life and the explanation of the Soil Food Web.  However, in order for those amino acids to enter a plant and be part of the nitrogen budget of the plant they must have the assistance of the mycorrhizal fungi.  It's much more efficient for a plant to uptake amino acids whose molecules include nitrogen needed to build tissues than to uptake just nitrogen minus the amino acid.   The problem with depending on Nitrification as the source of Nitrogen is that it results in the production of Nitrates that have a negative charge and the soil itself also has a negative charge, thus repelling the Nitrates.  This is why we lose our Nitrogen into the groundwater beneath the farm, which results in another problem.  I've included a paper I created for you that helps to explain what happens to nitrogen in the soil.

As for the fungus you can see in the soil, or in a compost pile, or the floor of a forest.  Both the fungus you can see, which are the saprophytic decomposers, and the ones you cannot see, the mycorrhizae, are so cool.  The saprophytic fungus, the ones you can see,  are the goats of the soil breaking down hard to eat stuff that the bacteria won't touch because the chemical bonds holding the stuff together are too tough for the bacteria to tackle.  The bacteria are the cows of the soil that wait for their meal to be prepared for them by the fungus, who can break those bonds, and the bacteria then take it the rest of the way.   The mycorrhizal fungus can dissolve the exoskeleton of a beetle, or a nematode, transferring the liquefied proteins to the host plant, contributing to the nitrogen budget of the plant.  The hyphae tubes of the mycorrhizal fungus can also drill through solid rock turning the rock minerals into a liquid and once again giving that bounty to the host plant.   This is exemplified when a crop soil lacks mycorrhizal fungus, the soil is loaded with phosphorus, calcium, zinc, etc., but the plant is still failing to get those elements out of the soil.   That's when we need to add a mycorrhizal inoculant to the equation!   Also, keep in mind that soil can be loaded with saprophytic fungus and test as a fungally dominated soil, but still lack mycorrhizal fungus, and the rock minerals are still not getting turned into a liquid and delivered to the crop.   Here's the equation of the energy and yield Cause and Effect relationship. 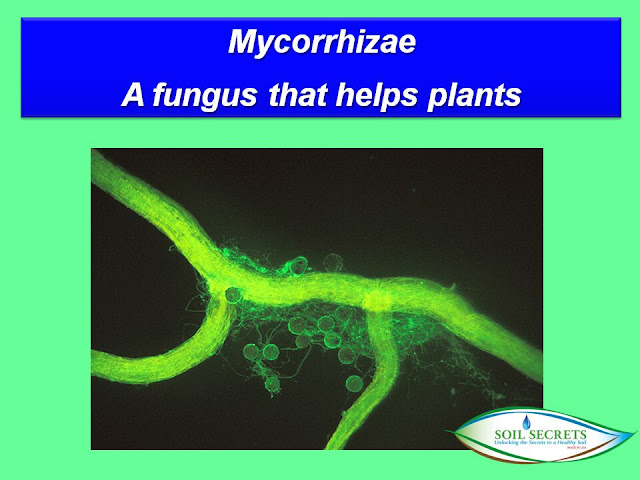 1. The plant cannot produce biomass, nutrition, or yield without energy being produced in the mitochondria found in all the cells.
2.  The cellular energy of all plants and animals is called ATP, short for Adenosine triphosphate.     Note the phosphate part of that name?
3.  Humans cannot have good health if we can't make enough ATP,   and like the plant and the soil relationship, we need phosphate uptake to make that happen, and because of soil health decline in agriculture phosphorus is our limiting factor.
4.  Almost without exception all the farm soils have been manipulated by conventional agriculture to the point where our crops cannot uptake phosphorus in adequate amounts because the equation lacks the mycorrhizal cause and effect relationship.
5.  We add mycorrhizal fungus, the fungal hyphae dissolve the rock minerals of the site uptaking phosphorus and all the other minerals that got in the way, and the crop now gets what it needs.   Therefore our food grown on those sites also has a greater Nutrient Density!
Michael Martin Melendrez