From the desk of Michael Martin Meléndrez - Managing Member of Soil Secrets LLC:


Much attention and concern has been recently paid to the increasing problem of
salinity in soils, particularly soils found in arid and semiarid lands that are being
irrigated. Where frequent irrigation is necessary, a residue of salts is left behind
from the evaporation of water, gradually but imminently concentrating the salts until
the soil can no longer support production. Plant roots generally do not absorb all the
salts, so the proportion in the soil of salts gradually increases to a point of toxicity.
The problem can be made worse by the use of animal manure based soil
amendments in the form of raw manure or compost and from acid based fertilizers.
The retention of salt in the root zone can cause negative ‘Fluid Dynamics of
Plants’ inhibiting the movement of water and nutrition into the plant. Water water
everywhere but not a drop to drink! Soil compaction and the dispersion of soil
particles can further compound the problem. The constant increase in irrigated farm
soil salinity is a threat and a limiting factor, as soil salinity results in low crop yields
and a dramatic increase in water use! So how do we fix the problem of soils? An
emphasis on breeding plants that can tolerate salt has been a major focus of our
Agriculture Universities, however the real key to success must be the
implementation of better biological soil management and using inputs that help
crops tolerate the salinity while also contributing to stopping and reducing the
salinity of soils. The goal while practicing the ‘biological management of soil’
must be improved soil health! Two tools in the tool box that meet that benchmark
include using mycorrhizal inoculation and fortifying the soil with Humic Acids that are
Supramolecular. See a chart on the last page, showing a salt reduction test using
Humic Acids. The test was sponsored by the North Texas Oil and Gas Association
in 1995. This trial used raw Humate, a geological ore called Oxidized Lignite that’s
not Supramolecular. The results were surprising because Humic Acids from such a
source are very polymorphic and are most likely not Supramolecular. In fact,
university and commercial soil labs are not capable of performing a true Humic acid
purification from Lignite or from soil, required to perform a true chemical molecular
analysis of Humic Acids or their molecular characterization and functionality.
Therefore we have no idea what quality of material was actually used by the North
Texas study in 1995, however when Soil Secrets tried to replicate the test using the
highest % Humic Acid Oxidized Lignite available, the test failed to achieve the same
results. However when we used Humic Acids that were formulated by Soil Secrets
to be Supramolecular (tested and measured by the Technology Transfer Program of
Los Alamos National Laboratory and Sandia National Laboratories), we got
excellent results, matching and sometimes exceeding the 1995 North Texas Oil and
Gas Association tests.

Some research has also looked at the possibility that inoculating a crop with the
Glomus species of Mycorrhizal fungus can also help a crop tolerate Salinity. See
the attached Abstract on the subject.

My conclusion is that implementing an input program with both Mycorrhizal
inoculation onto the seed of crops, while also adding at least 2000 pounds of active
ingredient of Supramolecular Humic Acids into the top 6 inches of soil can have a
positive influence in the Sodium Absorption Ratio (the SAR) and the PPM of Sodium
in problematic Sodic and Saline soils. 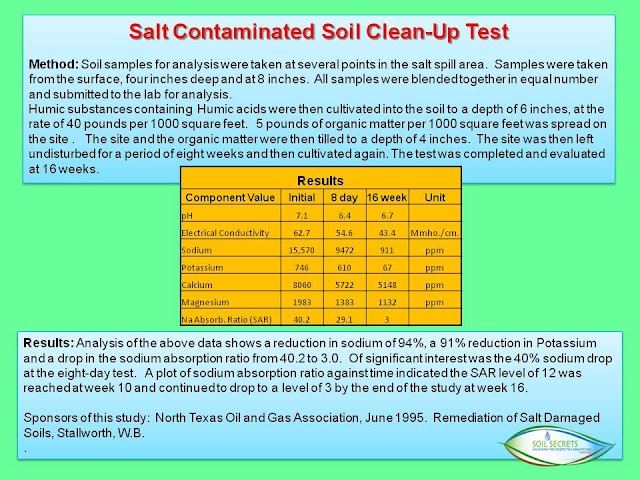