Conserving Water in Agriculture and in Urban Horticulture; The Past

Conserving Water in Agriculture and in Urban Horticulture;
The Past
by Michael Martin Meléndrez

In recent years I've written about techniques that could play a vital role in helping us conserve water in urban horticulture and in agriculture, particularly since the Southwest and the are so dependent upon irrigation to grow crops, parks, sports fields and home landscapes.  Water is an issue that's growing and will not ever go away in our life time, so we better be on the learning curve of how to deal with it.

Soil Secrets has gotten better and better at what it does as a Soil Ecology company, with our Material Science and product line-up performing at a cutting edge pace.  For example, what we were doing 20 years ago was pretty fantastic and got the attention of many new clients and industry leaders, however compared to what we can do today, it was pretty crude stuff.  And compared to what the typical retail nursery garden store sector is offering today, our materials are like comparing the Tesla Premium Electric car to the first Model T, particularly when it comes to rehabilitating the soils health and conserving water.
The Past:
Historically our industry has tried to fix soil by adding gobs of organic matter in the form of compost, peat moss, worm castings, mushroom compost or aged steer manure, in the hope that we could create a top soil out of poor dirt.  The results were sketchy at best and the soil structure may actually be damaged because of the high salt index of some of these materials, i.e. the steer manure and the mushroom compost.  In , even compost can cause soil structure problems as there are few good sources of compost being sold that are not rich in excessive salts with the added problem of high pH chemistry.  The problem is the source/ingredients used to make the compost are not dependable or consistent and often times salt rich manures are used.  There is composting methodology described by David Johnson, PhD in molecular biology from , Institute for the Energy and the Environment, where compost made with dairy manure can be remediated to not be problematic with salt, however his technique is novel and not being used by the commercial composters thus far.
So all the nurseries push adding compost and other soil amendment products in the attempt to fix soil, regardless of the efficacy of the practice.  I even heard a PhD Extension Agent from say you cannot add too much compost while building the soil of your new home.  However he's very wrong on that point.

On the surface the technique sounds good and logical since we know that our poor desert soil did not look or behave like a rich top soil.  It was not capable of storing water, providing slow release moisture to the vegetation.  It was not capable of keeping the trace elements constantly available for plant use and it just didn't look like a rich dark top soil.  Without water being constantly available the mineral trace element nutrients cannot be held in a 'nutrient water solution' for most of the growing season, something necessary for proper plant nutrient uptake.  The problem of watering (irrigation) followed by a drying out period resulted in this sequence of events.  We water and for a period of time the soil could be too wet making it anaerobic (without oxygen), which causes the toxic build up of root poisons like lactic acid and alcohol.  The soil then begins to dry out and for a brief period of time there's just enough moisture to maintain the 'nutrient water solution' until the soil gets too dry.  During the excessive dry phase, vegetation has trouble conducting photosynthesis because water and mineral nutrient uptake are needed for that process to work.    Without photosynthesis glucose production stops and the transference of the liquid carbon (glucose) to the rhizosphere (figure 1) biomass of microbes is inhibited. 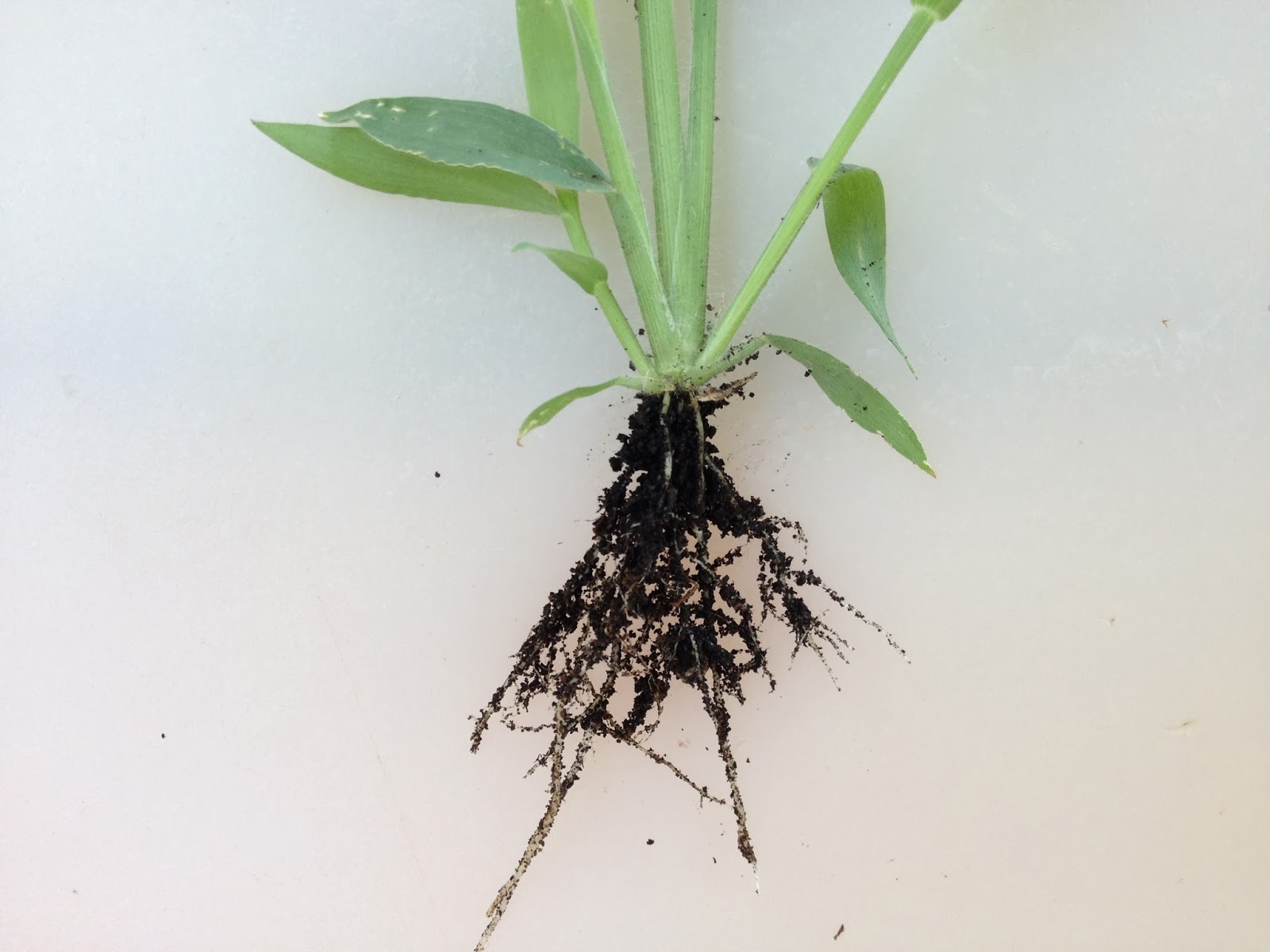 Not good for those beneficial microbes!  The rhizosphere is the narrow region of soil that is directly influenced by root secretions also called root exudates which is the mono saccharide glucose needed by the soil's microbiology including the mycorrhizae.    It's this terrestrial biosphere of microbiology that builds the amazing molecules of supramolecular humic acids, the black stuff that makes a top soil dark in color.    The result of the soil being too wet, just wet enough and then followed by too dry is a feast-or-famine cycle, which is never good for plants.

Then we have the obstacle of the soil chemistry pH being too high for many of us living west of the "lime line" center of 's continent.   When the soil pH is high (alkaline) many of the trace elements such as iron and zinc, etc., are chemically occluded and not available for uptake.  In the case of alkaline soil with poor mutualistic microbiology "solutioning" of the indigenous trace elements is not taking place, therefore they are not easily available!   The commercial entities such as retail nursery's and agriculture farm fertilizer company's  traditionally suggested using acidifier products to try to force solutioning of the trace elements, but the process is not a permanent fix and may actually cause a multitude of other problems that are worse than the original problem.   Adding lots of organic matter was also popular, hoping that would  fix the problem, however in recent years Professional Soil Ecologists have come out of the wood work educating people that adding organic matter to soil is a bad idea as it increases the Biological Oxygen Demand of the soil causing it to go anaerobic, not a good thing.  Plus it doesn't do anything for instigating and perpetuating the bio-geo-chemical process of a healthy soil.  However there is a solution and its one farmers and urban horticulturists across America are starting to learn about.