January 12, 2014
The link below takes you to a web site that gives old outdated information about how to solve the problem of Iron Chlorosis.  The nurseries and garden centers of the world need to get on the learning curve about this, as do the agronomists that advise farmers.

From Michael's paper 'The Journey to Better Soil Health' which will be presented at the 1st Humus Experts Meeting in Austria.  January 22nd, 2014 where Michael is one of eight global experts invited to present at this conference.  For more information about this conference:

Click on the link below to view the brochure on the event.
International Humus Experts Meeting 2014.pdf

The following are bullet points that will be used in Michael's lecture.  These points are also in his paper, in the conference proceedings.    Some of this science explains why gardeners in the western half of the United States often have problems with yellowing of leaves called Iron Chlorosis.  The image below shows a Maple Leaf with Iron Chlorosis. 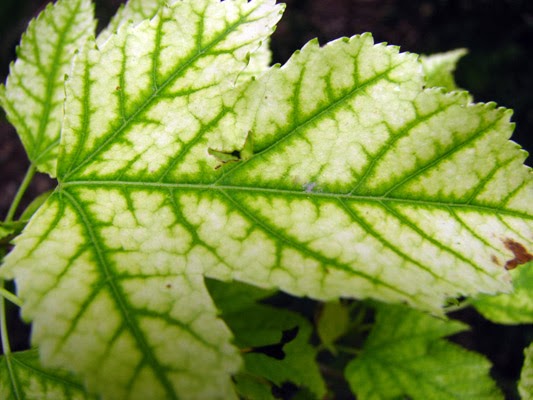 Most of the time nursery people, blogs and forums will provide solutions to this problem by recommending one of two techniques.  Acidify the soil, or treat the soil and the plant with extra chelated iron.  However is this the real solution, or is "solutioning" via the Carbon Connection the answer?

1.  The Carbon Cycle: what is it, how does it work, what are the various forms of carbon in soil and what are the characteristics of the various forms?  Is all soil carbon just dead and rotting organic matter?  Does dumping tons of manure or compost onto the site fix the problem of poor soil, poor plant nutrient uptake, etc.

2.  The Bigger Problem caused by poor soil:  We now have the lowest nutrient density in our food that we've ever had at any time in human history and we can relate this to what's happening to us health wise.  I don't know what percent of our health care in the United States is disease care, but we are told by our government that our National Health Care represents 30% of our entire economy, the GDP.  Health Care in the United States is not keeping people healthy, its only Disease Care which is causing the health care system in the United States to crash.   Disease is directly related to our poor diets, caused by food weak "Nutrient Density" a deficiency of trace minerals which compromises our immune systems ability to work properly.   Most disease of humans is nutritionally related.  We don't have the trace elements in our bodies because our food lacks them and our food lacks them because our soils are compromised at most conventional farms and even Organic Certified farms.   Farm soils are compromised because the farmers are not on the "Journey to Better Soil Health" and are not working on building the carbon levels in soil.   As a whole our farmers and our academic society of farm experts do not understand the distinction of the various forms of carbon in a soil.  Not all soil organic matter in the soil is the same!

3.  Our soils are not functioning well anymore and carbon is all about the functionality of the soil contributing to the bigger picture of helping plants uptake the trace elements.  You are what you eat.

4.  Solutioning Soil Elements:  If the Carbon Cycle is weak or disrupted than the flow of trace elements to the plant is compromised, as its the combination of powerful Humic molecules and the soil microorganisms that make the trace elements available by "solutioning" the process of dissolving the trace elements from the complex chemistry of the soil into available mineral nutrition.

Microbes bring trace elements to the plant via "Solutioning" in exchange for food provided by the plant in the form of carbon rich monosaccharides sugar. The sugar was made in the plant leaves from atmospheric CO2   fixed during photosynthesis. The plant then exchanges the energy carbon rich sugar for minerals that were made available by mutualistic fungi called mycorrhizae and by the terrestrial biosphere of soil microbes.  So if you have a mineral deficiency in the plant such as  Iron chlorosis and the soil is known to have adequate iron levels, almost always the case in Western soils,  than you have a soil microbe problem!

5.  If the plant is unable to uptake what it needs from the soil it will do a lessor job of producing liquid carbon in the chemical form of monosaccharides such as fructose and glucose,  energy needed by the soil microorganisms.    The carbon element found in the monosaccharides came from the atmosphere's CO2 during photosynthesis and the carbon elements found in the molecular structures of the Humic molecules also came from the atmosphere's CO2.  A process called Carbon Sequestering which results in the accumulation of long term banking of recalcitrant carbon in the soil!  This is what we call top soil!   The Humic molecules are recalcitrant supramolecular substances rich in carbon!  Compost, manure, peat moss, worm castings and combustible soil organic matter (measured in soil tests)  are also rich in carbon, but the carbon is not recalcitrant, its labile, which means it will rapidly break down and turn back into CO2.  Recalcitrant carbon substances of soil have a long resonance time in undisturbed soil, possibly lasting thousands of years!

6.  However without soil microbes helping with adequate trace element uptake resulting in optimum photosynthesis, producing extra monosaccharides leaking from plant roots as exudates food for  microbes, we would never see carbon sequestering into recalcitrant carbon substances resulting in the accumulation of top soil.

Without soil microbes Humic molecular carbon would fail to form and accumulate because the precursor chemicals would be lacking.
The whole thing is called the Carbon Connection and its a must if we are ever going to fix our soils and live on the right side of history.