The photo was taken by Bob Geyer, one of our Soil Secrets associates in California.  Bob also represents Aggrand in California for agriculture.  This field was treated the first year using just the Aggrand protocol and the corn silage yield increased  from 24 tons per acre on the sandy areas of the farm and 26 tons per acre on the better soils, jumping to 38 tons per acre.  At the end of the first year the corn stood at 15' 1" while the variety used called Bagglietto is suppose to only grow to 12 1/2 feet.        The second year the field was  treated with TerraPro and the same corn variety was planted using the same Aggrand protocol as the first year.  This time the corn grew to 15 feet 5 inches tall.  At the time of this blog the silage has not been harvested so the tonnage figures are not known, but Bob calculates it will be several tons greater per acre than the first year.

Here's the full nutrient/Soil Secrets protocol used the second year:
1. At planting 2 gallons of Aggrand 4-3-3 liquid per acre was shanked into the soil
2. At planting 1 gallon of the 0-0-8 Aggrand kelp and potash liquid was shanked into the soil at the same time as the 4-3-3.
3. 1-ton per acre of Soil Secrets Ag Grade TerraPro was  broadcasted across the field.
4. 60 units of Nitrogen per acre using UN-32 liquid was applied at with the 2nd irrigation
5. Field was planted at 32,000 plants per field and the extremely light nitrogen load of 60.64 pounds of nitrogen per acre worked extremely well.  When fields were planted at 64,000 plants per acre using the same protocol the corn sitll reached the 15 plus foot height, showing that the 60.64 pounds of nitrogen was still enough even with double the number of plants. 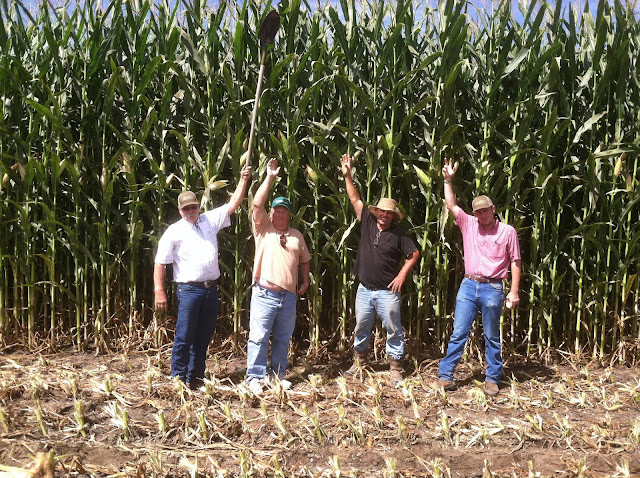 January 13, 2012
I was recently asked to provide a simplified explanation on the importance of Cation Exchange Capacity (CEC) values. My Response:  CEC is the ability of a soil to hold onto plant nutrients.   The finer the particle size the higher CEC value, generally speaking. For example sand particles are course and visible to the naked eye, where as clay particles are fine and are not visible to the naked eye. So clay will have a higher CEC value than sand. It is obvious to most of us that sand cannot hold onto water or nutrients as well as a soil with a finer texture. Therefore, soils rich in Clay and Loam size particles are universally recognized as being better for farming - CEC explains this.  The numerical value for CEC represents how much nutrition can be held by a given amount of soil. For example one pound of a clay loam soil with a CEC value of 20 will hold 4 times as many nutrients as a sandy soil with a CEC value of 5. 20/4 = 5 .  It's all about math, for example Nitrogen in
Post a Comment
Read more

Food Nutrient Density and Why our BIOpack is so important

May 02, 2018
Can you  tell the difference?  The first image shows a field that was not sprayed with your Consortium Soil Probiotic called BIOpack.  The second image field was sprayed.  Look at the difference in color and the overall biomass increase   the treated field.    BIOpack is ATCC Certified (American Type Culture Collection) and  USDA  Biobased Certified.  All 20 species included in the BIOpack are exact species that will perform a known Mode of Action which will provide a specific benefit to the crop you are growing.   For example if your lawn, trees, or crop are not getting enough iron pulled out of the soil to satisfy the needs of the crop or plant, than BIOpack can fix that problem by provided a microbe for that particular nutrient.   Bottomline is that BIOpack will improve the Nutrient Density of any crop you grow as it improves the solutioning of the mineral element in the soil from a normally not water soluble into a water solution so the plant can drink it.   This is important
Read more