Skip to main content
January 06, 2016
John Kemp, owner of a competing company of ours, posted a Facebook report defending foliar feeding with some elements as proof that the tool worked in solving a problem.
The John Kemp post on Facebook said this: Please check out this outstanding explanation of the photosynthetic process, and the function of carotenoids and other compounds. Clearly describes the functions of manganese, iron, and copper, particularly for needed oxidation and reduction reactions. We find these trace minerals to be consistently inadequate in many of the crops we work with, and get a very strong crop response when they are address with foliar applications.


He's basically saying that by foliar fertilizing a crop with manganese, iron and copper elements the plant needs for conducting photosynthesis, he's provided a solution. Here's my reply to this post:
The weak link of a plant uptaking (getting out of the soil) manganese, iron and copper plus all the other essential elements of plant and animal nutrition is contingent upon a mutualistic relationship between the plant and a Mycorrhizal fungi. At Los Alamos National Laboratory and the New Mexico Consortium Labs, we (Soil Secrets LLC) are looking at the synergy between soil bacteria and the mycorrhizal plant relationship, isolating exactly who's who and who's doing what and most importantly which microbes will associate with other microbes. This also requires looking at the microbial genome, the DNA foot print and performing gene sequencing. We are also working on the best procedures for multiplying and propagating these microbes, for commercial inoculant products. Most of the time the major and the trace elements are present in soil, however when the synergy relationship involving soil microbes and the aromatic chemistry provided by the supramolecular humic molecules is weak or out of whack, the native elements in the soil will fail to be delivered to the plant. Another weak link of agriculture is our soil labs don't have standardized methods of analysis that are accurate at finding what's really in the soil, in terms of how a plant is suppose to get them out of the soil. The plant in Nature uses Nature's Soil Ecology, which is a Bio - Geo - Chemical process in order to harvest those elements and also to build a carbon rich top soil. This is when supplementing additional elements will present a benefit which is really just covering up the symptom but not curing the problem. Its kind of like having a headache which is caused by a tumor and when you take an aspirin the headache goes away. You stopped the symptom but you did not cure the problem. At Soil Secrets LLC we focus on curing the problem, by priming the Bio - Geo - Chemical process using molecular biology, where we've hired the best Science labs on Earth to participate with us in Proof of Concept Research examining, developing and manufacturing the microbes, and the aromatic chemistry carbon rich molecules that make soil a fertile and productive place for everyone concerned. We've been doing this at improving levels of competency since the mid 80's, and are now using this science to restore some of the most toxic mine tailing sites on earth. Mine tailings so chemically corrosive that if you hold the stuff in your hands it will burn your skin. In a matter of weeks we can grow vegetation on these sites and begin the process of soil carbon sequestration, where formerly nothing has grown for over a hundred years. On these same sites, decades of testing have failed to find success, using products such as compost, bio-solids, bio-char, compost tea, etc. The process of sequestering atmospheric carbon, turning that carbon into useful caloric molecules of Protein, Fats and Carbohydrates is accomplished because of RuBisCo, the most common protein on Earth, taking place in the Calvin Cycle, shown in the image below. 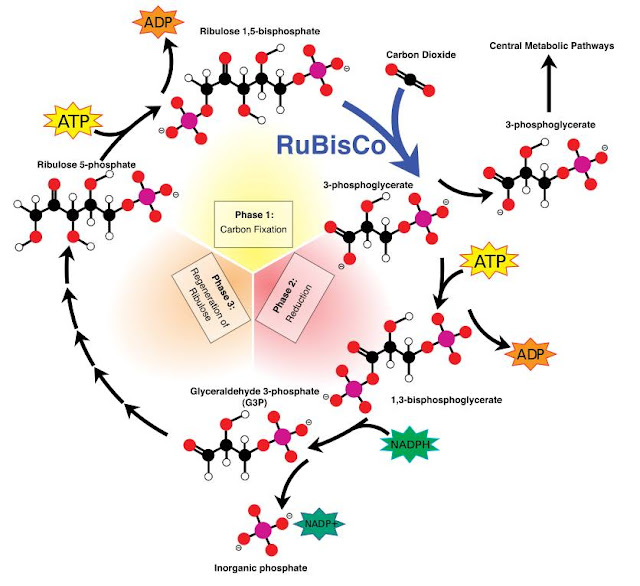